Crop residues as feed for insects

Crop residues as feed for insects

Most crop residues are left at the field to fertilise following crops. However, harvesting these residues could prove to be interesting. Belgium research partners VIVES and Inagro tested various crop residues (tomato plants, leek residues, bean foliage, cauliflower leaves and Brussels sprouts sticks) as potential rearing substrates for black soldier fly (Hermetia illucens) larvae. Tomato plants (stems and leaves) were not a good rearing substrate for the larvae. This was probably due to the high fibre and low digestible carbohydrate content. Moreover, due to the presence of harmful solanines many larvae died.

Lab scale tests were performed by VIVES concerning the optimal nutritional composition of the rearing substrate for black soldier fly larvae and served as a basis for the evaluation of plant-based side streams usage on pilot scale (Inagro). The diversity of these plant residuals is very big and a vast number of combinations are possible. Therefore, in order to select interesting residuals and mixtures, experiments assessing the nutritional requirements of the larvae were conducted.

Various economically important crop residues (leek residues, bean foliage, cauliflower leaves and Brussels sprouts sticks) were tested at the pilot facility of Inagro. The nutritional composition of these residues was determined (VIVES) and substrates were composed for the larvae (i.e. mixtures of crop residues with side streams form cereal and potato production). The best results were obtained for substrates containing green bean foliage. This crop residue (composed of leaves and stems) contains a lot of high quality proteins and combined with starchy side streams a good growing substrate for the larvae can be made.

In addition to testing fresh crop residues, research was conducted on fermenting the crop residues as a means of low input long term preservation. The results show that the fermented residues have the same value as the fresh forms. Fermentation can be a sustainable way of preserving seasonal residuals compared to energy consuming freezing.

According to the current EU legislation, the produced BSF larvae can be used in feed for pets (reptiles, birds, cats and dogs) and aquaculture. The oil can be extracted and used as feed for pigs and chickens. Moreover, this oil can be applied in cosmetics or as biodiesel. The larvae also contain the fibre component chitin which can be transformed in chitosan, used in crop protection or pharmacy. 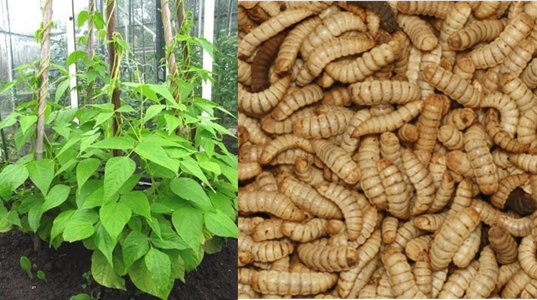