Discarded endive heads were used as a high value base ingredient for endive croquettes. This case focused on the valorisation of Belgian endive heads and leaves that were discarded for aesthetic reasons during the final post-harvest quality control and selection. These endives were deemed unfit for direct sale because they are either too small or slightly deformed. In terms of product quality they are however equivalent to the first class fresh market endives that are sold to the general public. The aim of this case was to develop a continuous production process (simulating a large scale industrial production process) rather than a batch by batch procedure. At the time that this product was developed, no commercial pressing company was available or had the proper equipment to perform the pressing of the endives to obtain a fraction of juice and a fibre rich press cake. ILVO provided support to the grower and producer by making its infrastructure available at the ILVO Food Pilot (http:\/\/www.foodpilot.be\/), with permission from the Belgian Food safety agency (FAVV) to produce food-safe batches to make the croquettes. Initially the raw product needed to be cleaned to avoid that debris and remains of earth end up in the press and contaminate the end-product. Since the endives were produced using the traditional method (cultivated in soil, rather than aquaponics), they often still contain some remains of dirt and sand, and must be thoroughly washed\/cleaned prior to processing. To achieve this the endives were briefly sprayed with water in a tub, the excess water was then drained and removed, after which the endives were cut in smaller pieces. Washing whole endive heads has proven problematic because large amounts of water remained inside the endives. This washing step was significantly improved by cutting the endive heads in half (longitudinally) prior to washing. This manual step was however more time consuming and labour intensive, particularly for larger batches. After cleaning, the endive heads and leaves were cut and transported to a vacuum press (VaculIQ®) to obtain two fractions, a liquid juice fraction and a fibre-rich press cake. From these processed materials the company Gastronello created the Belgian endive croquettes according to their recipe. 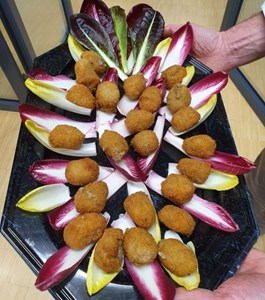 The creation of an endive croquette was done in close collaboration with the Belgian endive grower Cools and the family company Gastronello, who specialises in the creation of all sorts of croquettes. The cutting edge innovative pressing techniques used to obtain the press cake fractions and juice under vacuum pressing are not yet available for large scale production. Therefore ILVO and Gastronello, under supervision of the Belgian Food Safety authority FAVV, collaborated to develop a small scale commercial production for the creation of the basic ingredients made from Belgian endive leaves for the croquettes.