Colorants from remaining black berries and other fruits

Colorants from remaining black berries and other fruits

BioBoost  partner NIAB  has  led the  project activities  for  valorisation  of  crop  co-products  to  produce new  products  for  cosmetics. In  order  to  ensure  economic  outcomes  and  continuity of  the  initiative beyond the scope and lifetime of the project, NIAB has worked very closely with SME’s in the Eastern Agri-Tech  Innovation  Hub  (EAIH)  incubator  north  of Cambridge. NIAB  has  worked especially  closely with Steve Taylor MD of Celbius Ltd and Zembra Ltd, who is a licensee based at EAIH and an expert in this field. Working with Steve and others NIAB set up a pilot plant at the site and delivered data out of that initiative. NIAB  has  set  up  a  pilot  plant  at  the  EAIH with designated  workspace  and equipment. NIAB identified crop co-product and waste feedstocks and collaborated with commercial growers;  especially,  RW  Walpole  to  provide  Blackberry  and  Blackcurrant  waste  for  this  project.

By enabling  contact  between  Steve  Taylorand  Bonnie  Mitchell,  a  business  consultant  with  contacts  in the  health  and  beauty  industry,  NIAB  has  escalated  the  Route  to  Market  for  CelbiusLtd  to  a  much higher level. These contacts are currently sourcing funding to upscale processing based on a pilot to pre commercialisation.

UK  Blackberries  Growers  are  facing  a  new  problem  to  economic  production  caused  by  the  spotted wing Drosophila, unlike other species of fruit fly, this species lays its eggs within the undamaged fruit. In  order  to minimise  the chance  of  attack,  blackberry  farmers must  now  strip off  all  remaining  fruit and remove it from the environment after the main harvest. This wasteis now available to be used in alternative  products  and  has  led  to  the  availability  of  large  amounts  of  blackberry  and  other  fruit waste. Using this crop product the NIAB team has investigated sonic-assisted biotransformation of a purified anthocyanin extract seeking new derivatives, for the future development of new natural safe products, for example as colourants and preservatives in cosmetic products.

NIAB has also been investigating the market for brown colourants in the retail and professional hair product markets. The majority of feedstock’s for brown colourants are almost all synthetic chemical products.  However,  there  are  a  few  notable  exceptions  such  as  henna,  which  has  a  long  history  of use  in  this  area.  This  activity  within  the  BioBoost  project  sought  to  investigate  whether  alternative sources  of  brown  colours  could  be  obtained  from  crop  co-products  and  waste  material,  with  an emphasis on avoidance of toxic solvents and extensive chemical processing. Three potential sources of brown colourant were investigated, namely spent coffee grounds, olive pomace (imports) and UK walnut skins. A  green  extraction  protocol  was  demonstrated  for  the  brown  pigment  in  walnut  skins  using  only water  as  the  solvent.  The  material  can  readily  be  purified  further  by  adsorption  onto  a  polyacrylic resin followed by bioethanol desorption. Initial trials for binding to hair met with limited success, but different formulations and methods may solve this in future. 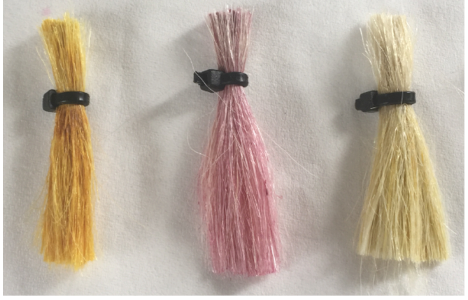